Do Angels Hang Out in Cemeteries?

Of course they do, and I have a picture to back up that claim.

St. Mary’s Cemetery is on Ilchester Road in Ellicott City. It was established in 1894 so it is rich with history. The size of the cemetery is small now, but it used to occupy over three acres.   In the early 1990’s a developer bought the property intending to build homes, but a preservation society was able to save approximately one-third of the original cemetery.

This is where we conducted our investigation. Records indicate that there are graves that aren’t marked with headstones because the people were slaves or poor, so besides the few tombstones at St. Mary’s Cemetery, there could be unmarked graves.

The Ghost Radar started talking before we even got out of the car. We got the name “Danny”, so we decided to look for the name Danny on the tombstones.

We located him fairly quickly. At the top of a large obelisk-shaped tombstone was the name: “Daniel C. 1915 – 1915”  As I was taking a picture of the tombstone, I couldn’t imagine the pain and suffering that Danny’s parents underwent. Daniel was at the top of the headstone, then beneath him was his brother, who had lived to be three years old, and beneath them were twins, who also died in infancy like Daniel.

Here was the grave of four babies from one family, and this is where I captured the picture of an angel holding a baby.   If you look closely, you can see the baby’s eyes and mouth and the side profile of a female angel holding him.

As Robby and I left the cemetery that day, I waved good-bye to the spirits and yelled out of the car window, “Bye! See you guys tomorrow!” I could feel a crowd of smiling spirits waving back and I could feel their joyous anticipation over our promised visit.

The first visit was during the day so we returned the next evening after dark. I felt welcomed and the spirits were eager to talk to us. Someone was a doctor who was either from India or had visited India. The word “Engineer” came through. With Ellicott City’s historic railroad this could easily be someone associated with the railroad.

Another dog was mentioned, or could it have been George Bolton again? He was just a short distance down the road so perhaps he was afraid that we’d forgotten about him!

Not a chance George.

The pictures that night were filled with orbs.  Some of these orbs could be bugs or dust, and most were opaque, but one orb stood out and was brighter and more brilliant than all the rest.

These are the spirits of St. Mary’s Cemetery. They are located very near our house so it was wonderful getting to know them and it’s nice to know that we have such friendly neighbors! 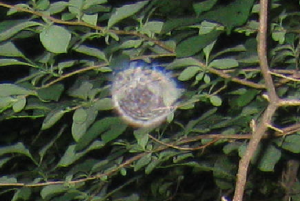 I like the name Danny. I wasn’t crazy about the whole birthing operation and I was far from being called a model patient, but I arrived in the early morning under gray skies. Mars was still shining on the horizon as my father attempted to build a fire to chase away the chill in the air. The sky soon filled with ashes from the flame climbing up the chimney, but we weren’t worried about the fire.

It was strong, but I wasn’t.

If I had grown up, I would have been an Engineer. I could see myself driving a powerful steam engine leaving a cloud of smoke as I delivered cargo, passengers and mail to far-away lands. I’d have a mighty dog who traveled with me and we’d become famous for our quick trips across the country.  Equally famous would be my best friend, who was a doctor in India.

Clearly, these things didn’t happen, but I still observe this world and I still dream.

My plan was to leave my brief mark on this world. Next time I think I’ll stay a little longer, maybe I’ll try Mississippi….

Next week we will be investigating the remains of the Orange Grove Flour Mill.

In June of 2003 the debris from Simkins Paper Mill erupted over Ellicott City like Mount Vesuvius.

It was ten years ago this month when I stood outside with my neighbors watching ash cover our homes, yards and cars. The sun was setting as word spread that Simkins Mill was burning down.

The ash from the paper mill filled the sky. This was not the first mill fire, nor would it be the last, but this fire severely damaged the mill and forced it to shut down forever. Built in the 1820’s, it was converted to a paper mill in the late 1920’s and it remained in operation until 2003.

Today the abandoned mill lies in ruin. There have been many stories of hauntings over the years, so Robby and I decided to make the paper mill our first official paranormal investigation site.

We were not disappointed!

Strangely, the mill has been abandoned for ten years, but two days after our investigation, a newspaper article was released stating, “Demolition Begins on Simkins Mill.”

Coincidence? I don’t believe in them. There was a story here that needed to be told.

We began with an evening investigation and finished up the following day. Both times we were able to capture remarkable photos.

The first night of our investigation was profound. We captured a “Casper Orb” on the road side of the mill building. I have photographed many orbs, and most are light and opaque, but this orb was bright and I’ve never seen one with a face!

The next day, Robby and I walked along the river bank and took pictures of the back of the mill building. As we walked, the Ghost Radar app was talking up a storm and there was mention of a dog twice.

Once when the Ghost Radar said, “Dog”, I took a picture of a window. We were looking at a certain window because there was a long string hanging in front of it and the string started swinging wildly. A bird could have caused the string to move, but combined with the app telling us about a dog, I felt that we were being directed to take a picture in that particular area.

At the top of a window, there is a Ghost Dog looking out at us.

His name is George Bolton.

The ghost stories that I’ve read about Simkins Mill are spooky and scary, but Robby and I found a friendly spirit showing itself as Casper, and a cute puppy dog who wanted to be recognized.

Since the demolition of the mill is finally imminent, I think these two spirits wanted to be remembered as friends, not as evil spirits. The mill is obviously dear to them and they wanted the good times to be remembered, not the ruins.

Ben and I worked at the mill. Whenever he brought a juicy bone for me, we would have a pretend battle over it and I would have to probably fetch a stick, but the reward was well worth it. Ben was good to me.

Dawn came early at the mill. Men would divide into work groups as they held their tools and settled in for the day. I have to admit, this is not the life that I pictured for myself. On my right were noisy machines and on my left were even noisier machines. You could either love them or hate them, but either way they created a way of living in this mill.

Life was good and I enjoyed my job as the mill guard dog, but today felt different. Something was wrong.

As an eerie vapor mist rose from the river, I made a discovery tonight that would prove to be my last.

Mark, the night manager, was vain and believed himself to be far more handsome than he was, but he carried a variety of treats that any dog would beg for so I tolerated him.

With a flower tucked in his vest pocket, he certainly won the best dressed award at the mill, but his mind was elsewhere tonight.  His movement towards me was calm, but I could tell that he was on a mission. He had a strange pole in his hand as he put the bowl down in front of me…

It was a Saturday when I crossed over.  There was a discussion over how the fire had begun, but their conclusions were far from the truth.

I want to be remembered as the Mighty Mill Dog.

I remain on guard, as always.

Next week’s Investigation will be at the St. Mary’s Cemetery on Ilchester Road in Ellicott City.