Phenomacon and the Gettysburg Battlefield Ghosts

Robby and I had a fantastic time at Phenomacon in Gettysburg, PA.

We met some of our favorite television stars and some pretty phenomenal ghosts on the Gettysburg Battlefield.

It was a true pleasure speaking with them and I hope we see more of them soon!

We also met John Zaffis and his son and daughter from the “Haunted Collector”. They were all sweet to talk to and we’ll be keeping an eye out for their future endeavors! 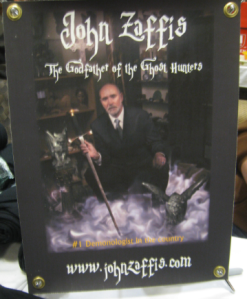 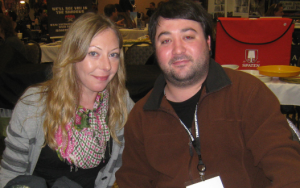 Joe Chin from “Ghost Hunters International” was terribly charming and we look forward to seeing his adorable smile on another show soon!

After the convention, Robby and I went to the Gettysburg Battlefield. After performing a thorough tour and familiarizing ourselves with the area, we went to dinner and waited for nightfall.

We wanted to return when it was dark and  hopefully there would be fewer tourists and more ghosts!

We were hoping for total darkness, but the Moon Shadow was so bright that we didn’t even need a flashlight!

We focused on two well-known haunted areas: the Devil’s Den and Little Round Top 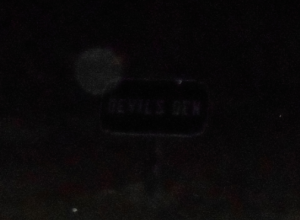 An Orb lights the way to the Devil’s Den 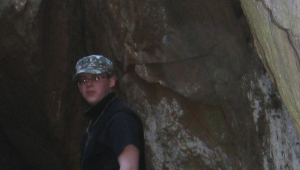 Robby and a giant Orb at the Devil’s Den

There were many bugs, which showed up as Orbs, but some Orbs were too bright and too coincidental to be classified as bugs.

The view from Little Round Top, as we looked down towards the Devil’s Den, was continually illuminated by the constant flash of cameras. A mock battle raged below in the quest to capture battle-weary Spirits.

The paranormal convention provided a steady stream of nighttime visitors to the ghostly battlefield! 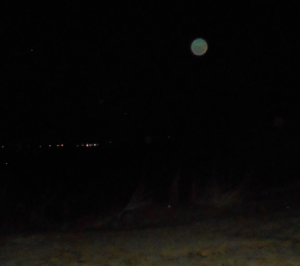 As Robby and I stood on the second floor observational deck of the tower monument, Robby came up with the idea to play some Civil War songs to inspire the Spirits. He played three Union battle hymns, then he found a Confederate song, but it wouldn’t play. So he tried another one, and then another. They wouldn’t play.

He tried a Union song again, and it played perfectly.

Robby was bringing up the songs on my phone, which had been bewitched all day. My phone is newly updated and was in perfect working condition before attending Phenomacon. I didn’t use my phone all day at the convention, yet the battery drained below 50% and my icons had not only been jumbled around, they were moved to other pages! Robby was using my phone that night as he pulled up the battle hymns.

Little Round Top was a Union fortification and was never overtaken by the Confederates.

Apparently, not even a Confederate song was allowed, even now.

Another Orb hovers near Robby at Little Round Top

Finally, it is worth noting that there was so much to take in at the convention and touring the battlefield, that I only used the Ghost Radar once all day. Robby was conversing with two Generals, so I relaxed and passed the time by activating the Ghost Radar.

The first words were: Henry Wilson Battle and Cost.

An internet search the next day provided the following information:

Henry Wilson was Vice-President under Ulysses Grant and he organized the 22nd Massachusetts infantry.

They were known as “Henry Wilson’s Regiment”.

Their worst casualties took place at the Battle of Gettysburg.

At the time that I had the Ghost Radar on, I was near the regimental monument of the 22nd Massachusetts on Sickles Road on the Gettysburg Battlefield.

How great is that!