Spirits and Sneach at Virginia Beach

We had a rare treat when we took a mini-vacation to Virginia Beach. We arrived the day after a foot of snow had blanketed the city. Our three days were perfect as we were blessed with sunshine, mild temperatures and Sneach – Snow at the Beach. As Rob and I were chasing dolphins along the shoreline, Rob became tongue-tied trying to describe the snow, sand and beach. He blurted out, “Sneach”, which I think described it perfectly.

Besides Sneach, there were plenty of Spirits to be found at Virginia Beach. During our short stay we were able to take time out to do some Ghost Hunting (disguised as tourists) . 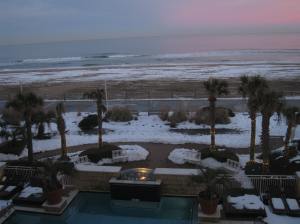 Rob jumps into the Sneach!

Rob in front of the Old Coast Guard Station

Prior to our visit, I read Haunted Virginia Beach by Alpheus J. Chewning. There is a chapter about the ghosts at the Old Coast Guard Museum. I asked the ladies working at the museum that day, Ruth and Marilin, if they had any experiences with ghosts in the museum and they had indeed. There were many tales, such as a man’s voice when no one was around.

This was the most active place that we toured, as far as photographic evidence. On our short day-time tour, I was able to capture many Orbs, and one Orb was particularly bright. The majority of the Orbs were at the entrance of the Museum, near the African-American wall of pictures. Each photo below is a different shot. There are multiple Orbs, and one especially bright Orb. 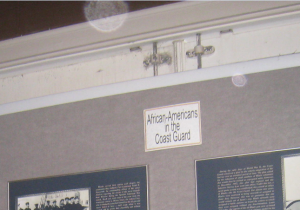 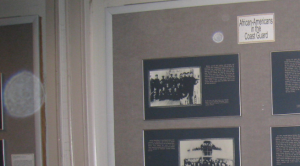 I would love to go back and explore the museum at night without all the noise and distractions, but I was pleased that the Spirits made themselves known through the photos.

They were also active on the Ghost Radar. 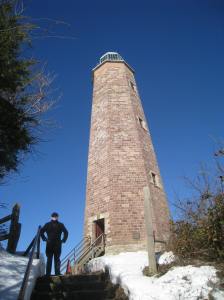 This one was interesting because I couldn’t find a ghost story about this lighthouse, but there are many ghost stories in the surrounding area. I was anxious to see if we could find anything.

The ladies at the gift shop said there were no ghost stories about the lighthouse.

The challenge was on!

I got two things. One was a picture of an Orb above Rob’s right shoulder as he was going down the Lighthouse stairs. This was significant because it was day-time and there were many other tourists with us in the tight spaces. We didn’t have the time or space to do a lengthy investigation.

Orb above Rob’s right shoulder as he climbs down the stairs of the lighthouse.

The second thing was more of a feeling that I had when we went to a park near the Lighthouse. Located on the base at Fort Story, there is a park with a statue of Francois Joseph Paul de Grasse. We had left the lighthouse and were exploring a bit, when we saw the park and a pier overlooking the beautiful shoreline. We enjoyed the view from the pier, Rob blew his new fog horn that we bought at the Lighthouse gift shop, but all the while I kept feeling drawn to the park area below and behind us. I had seen the statue, but only the back of it from the pier. There was too much snow to explore the park, but as I was returning to the car, I felt compelled to enter the park area to see the name on the statue. Despite the snow barrier and a lack of boots, Rob and I checked it out.

Prior to looking at the plaque on the statue, I kept feeling that there was fighting going on. I took pictures of the park thinking that there was a war and that a great battle was being fought. I could picture the scene of cannons being fired and I could hear the screams of wounded soldiers. The entire time that we were on the pier admiring the beauty of the ocean, I was drawn to the field behind me, almost as if I could hear the raging battle.

As Rob and I read the plaque at the base of the statue, my feelings made sense:

“This statue, a gift from France, is placed here overlooking the waters where Admiral Compte de Grasse successfully engaged the British fleet on September 5, 1781. The “Battle of the Capes” prevented crucial reinforcements from reaching Cornwallis, thus hastening his surrender.

Dedicated in grateful remembrance of the decisive contribution of Admiral de Grasse to the winning of American Independence.”

The continuing Battle of the Capes 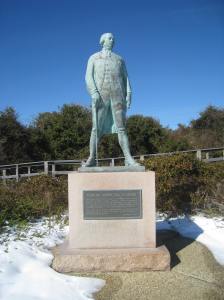 Remember, I had never been to Fort Story before and there were no ghost tales about it during my brief research prior to the trip.

I could feel the battle, but I didn’t know anything about it, until I read the plaque.

I feel certain that we heard from Admiral de Grasse.

My findings are that there are Spirits that visit the Lighthouse and there is a battle still being fought that can be viewed from the Lighthouse.

Nauticus and the Battleship Wisconsin

This was by far the busiest place that we toured, so it was difficult to be alone and do a proper Ghost Hunt, but I did get another picture of an Orb above Rob while he sat in a command chair on the ship.

Like the picture of the Orb above Rob in the Lighthouse, I think this is a Spirit that protects Rob, so it might not be a Spirit that hangs out on the ship, but it’s hard to say. 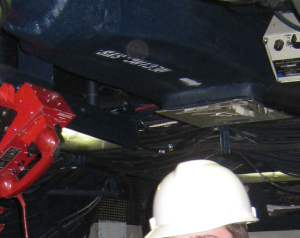 Orb above Rob’s head on the Battleship Wisconsin

Unfortunately, this well-known haunted hotel was not open so we couldn’t explore inside, but we did walk around outside and we peeked in a few widows. One of the most famous ghosts to haunt this grand hotel is Adolph Coors, who founded the famous brewery. He was found dead on the grounds outside of his 6th floor room on June 5, 1929 and he is seen at the hotel, along with other previous guests.

This would be another fabulous place to explore at night. 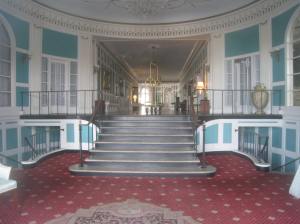 This was only my second time at Virginia Beach. The first visit was a few years ago in the summer and it was beautiful, but I loved this trip because I’ve never seen snow at the beach and the place was deserted. It was the perfect peaceful get-away.