Whistling Ghosts at the BMI

Robby and I went on a Professional Ghost Hunt at the Baltimore Museum of Industry (BMI).

It was Halloween Eve, it was nighttime and it was lights out in the Museum for the entire event.

It was a blast!

Robby peeks into the Museum theatre and a Ghostly Orb is right behind him peeking in too!

We had an exciting group experience, but I had two mind-blowing personal experiences when I was alone…

The Ghostly Gathering event was run by the paranormal group, PRISMd. We were given a brief history of a few tragic deaths at the BMI, then we set off to hunt some Ghosts.

Taking a Break, with a few Ghosts

We were on a break and I wandered off to take a few pictures away from the group. When the flash goes off in the dark, it blinds anyone nearby, so I took a few pictures of the main hall with no one around. One of the museum employees in charge that night, Stan, found me and I told him that I was just taking a few pictures, but there were also some other people further down in the hall and I pointed out to him where they were, behind the blue machine. He gave me a strange look, then he said that the monitors sometimes come on by themselves, so he went to check. He came back and said that none of the monitors were on and no one else was in the hall.

I said, “No, I definitely heard women talking, right over there.”

Apparently, I confirmed one of the Ghost stories of hearing women talk in that area. I didn’t know about it until Stan told me. He also said that even though none of the monitors were on, there are all male voices on the videos. I only heard female voices.

I thought it was members of our group, but he said no one was there.

Later, when we were in the main hall with the group, one of the monitors suddenly came on by itself.

By far, the most exciting experience that night was when I found myself alone in the main hall, quite by accident!

Everyone was outside near the docks investigating the haunted tug boat and enjoying the view of the harbor. It was a beautiful night, but it was a bit chilly so when Stan said that he was going inside for a jacket, the others said they were moving on to the Copula. I didn’t know where the Copula was, so I followed Stan into the main hall thinking that everyone else was right behind me.

Of course, I stopped to take a few pictures. A few moments went by and I noticed how quiet it had suddenly become. I turned around and realized that I was completely alone. I was thinking, “Where could the Copula be?”

And then I heard a faint whistling.

Robby often times whistles at the Ghosts when we’re doing investigations, so I thought it was him. As I looked in the direction of the whistling, I heard footsteps, so I moved towards them, but I found no one.

I was completely alone in the main hall…with the Ghosts!

I thought to myself, “Cool!” and I took more pictures.

I finally went looking for the group, but not finding anyone, I went to the main lobby and a member of PRISMd was there. She told me that the Copula was outside, so no one was inside except her, and she had been in the lobby the whole time. I told her that I heard whistling and she said,

“So they told you about the whistling stories.”

Of course, no one had told me about any whistling stories, but now I had confirmed another Ghost story about the Museum.

We were with the group doing an investigation in the printing room.   Someone asked a Ghost to make a noise or move something and one of the lights overhead started swinging. The other lights didn’t move. When the single light stopped swinging, we asked if they’d do it again, and a different light started swinging.

There are many reports of activity at the printing table, which is right where the lights were swinging.

I took quite a few pictures near the door that leads to the second floor offices. We investigated on the second floor and we were told about the many stories of Ghostly activity in the offices. Several times when I was taking pictures, I kept seeing a dark shadow on the stairs out of the corner of my eye, but when I looked, nothing was there and no one was upstairs at the time.

There were many Orbs in this area and in one picture, there is a bright Orb on the doorframe. 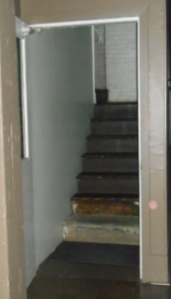 An Orb on the doorframe near the Shadow Figures 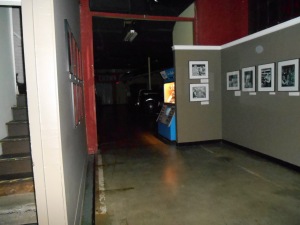 Shadow Figure area and another Orb

The Baltimore Museum of Industry investigation was a lot of fun and I can’t wait to do it again. Stan was a wealth of information and I enjoyed his stories about the museum. It was a great experience to work with PRISMd and I hope that Robby and I can do another investigation with them soon!

Stan Story: Chain that rattled on it’s own 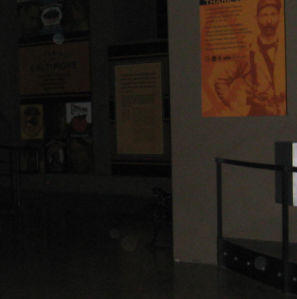 Peek-A-Boo! I’m right behind you!