The Snowball Effect: How It Began 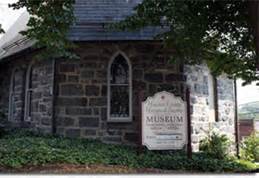 This is how a simple idea turned into a plan to explore our home town, Ellicott City, Maryland, by doing paranormal investigations.

But an unusual birthday party theme for a 16-year old boy is tough and I was beginning to lose hope. Then one night when Robby and I were watching our paranormal shows, it hit me.

A “Paranormal Investigation” party! Robby loved the idea and so did his friends.

But where should I begin?

I called a local paranormal society and they recommended that I talk to Karen Griffiths at the Howard County Historical Society Museum in Ellicott City. We visited her at the museum to discuss the party and Karen was wonderful! A group of high school students had just done a paranormal investigation in the museum for a school project and there have been other investigations at the museum, so Karen agreed that Robby could have his Paranormal Investigation Birthday Party at the museum.

I think the ghosts at the museum were in favor of the idea too.

As soon as I entered the building I felt them. The museum definitely had spirits and the Ghost Radar app agreed. Robby and I use the Ghost Radar app when we watch paranormal shows. The spirits love to talk and we have had many conversations with them. The app displays a “blip” when a spirit is around, but it also displays words when the spirits communicate.

Karen was telling us about the museum spirits and when she mentioned one particular spirit, the Ghost Radar said his name,

We hadn’t intended to perform an investigation that day, but already David was making his presence known.

The Ghost Radar conversation consists of random words. I like to make up stories when the spirits talk to us. Many times the words correspond with what we are talking about or doing, but often times it’s a mystery, which makes it even more fun!  My interpretation of the messages from each investigation will follow our actual findings.

We had so much fun at the museum that we decided to get plenty of practice for the birthday party and explore Ellicott City doing paranormal investigations.

We conducted our first investigation at Simkins Mill.

Wait until you see the Casper Orb and Ghost Dog photos!

Even my husband, a non-believer, was amazed.

The Voice of David

The definition of a museum is a place to store valuable historical items. I am the official overseer of the Howard County Historical Society Museum. This afternoon we had some new visitors. A team of investigators submitted their proposal for an interesting birthday package to Karen.

It was a race up the stairs, with Mark following close behind me, uttering a noun that I rarely use. He was not pleased about being interrupted when the new guests chose to arrive. We hopped up onto the Grand Organ as plans were discussed and we were about to settle in to listen when Little-Miss-Busy-Body cried,

“Why is she always butting her nose into our affairs?” Mark groaned, as the two of them faced off nose-to-nose.

I carry a heavy burden as overseer.

They were talking about me so I had to listen in, just in case damage control was needed.

A guest artist, Wiley Purkey, was displaying his artwork at the museum today. For a man with a low opinion of “our kind”, I had to question the origin of the painting that he sold the new visitors. From the looks of the print, I’d say he was a believer, but he doesn’t want to admit it.

I guess we’d better do a better job of convincing him.

“Let’s show him who’s really in charge of this place!” 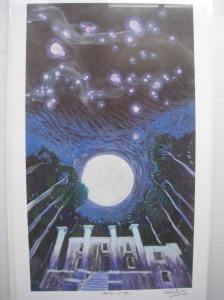 Spirits of PFI by Wiley Purkey