I Got A Ghost For Christmas 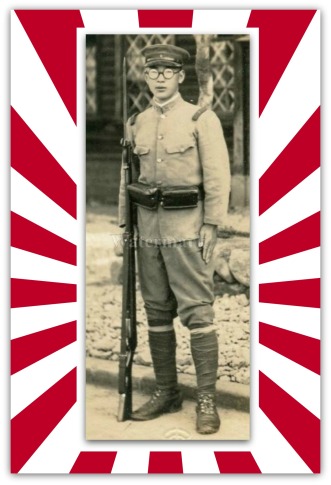 This is Dwight. He’s the ghost we brought home for Christmas.

His name is Dowaito, but I call him Dwight. It makes it easier for me to talk to him, and he doesn’t mind.

My husband received a WWII Japanese Arisaka rifle as a Christmas present. I only caught a quick glimpse of the gift during the flurry of holiday festivities, and I had forgotten about it, until I sensed an extra passenger when returning home on Christmas night.

I as I listened to a screaming Dwight behind me in the car, I asked my husband to tell me the story about the rifle. The Arisaka Type 38 rifle belonged to a Japanese soldier in WWII. This rifle is unique because the Chrysanthemum Flower Seal, stamped on the top of the receiver, is intact.

I chose the picture of the Japanese soldier (above) because he looks like Dwight. A face appeared in a reflection in one of the photos I took of the rifle. The eyes in the photo appear overly large, but later when I searched for a Japanese solider image, I realized that the large eyes could be glasses.

Dwight was used to yelling a lot because no one has listened to him for a very long time. Thankfully, the fates brought him to me so I can help him find his way home.

I thought the story ended here, but Dwight wasn’t finished with me yet. He knew I was listening, so he invited his former comrades to raise their voices.

In family discussions about the rifle, I learned that my husband’s brother (the gun owner before he gifted it), also has in his possession a Japanese Good Luck flag, complete with blood stains.

A wallet with Japanese family photos was acquired with the flag during WWII.

When a door to the Other Side is opened, multiple Spirits may use it. Thats’s exactly what happened with these Japanese soldiers and it’s why I wrote, Presidential Souls, about all of the U.S. presidents who came forward to deliver their messages.

The Moral to this story is: If you took home any antique gifts this holiday season, be aware that you may have been gifted with some extra special Christmas Spirits!